I’m chatting with a new acquaintance about my PhD, which explores the social, environmental, and genetic influences on the development of eating disorders. Not surprisingly, the answer to this familiar question is not so clear cut. But with the Eating Disorders Genetics Initiative, we aim to understand it better.

The role of genetics in eating disorders

Eating disorders are caused by a highly complex, interactive blend of ‘nurture’ (e.g., environmental and social factors) and ‘nature’ (e.g., genetics and biology). In fact, research has allowed us to calculate ‘heritability estimates’, which measures how much of the differences between individuals is due to their genetics. This could be differences in height, for example, but also whether or not someone develops an eating disorder. A heritability estimate of 100% would mean that all of the differences observed between people for something are genetic. For eating disorders, however, these estimates range from 52-62% for bulimia, 39-45% for binge eating disorder, and 48 -74% for anorexia.

However, heritability estimates are at the population level, meaning that they represent the average of a given population at a given time. But our DNA is unique to each of us, meaning some people are born with a greater genetic risk of developing eating disorders than others. If we think of this in terms of Jehannine Austin’s jar model (see image below), this would translate to some individuals having more genetic factors already present in their jar. These people might be more sensitive to certain environments or require fewer environmental factors to develop an eating disorder. The important thing to remember is that both factors combine and interact to produce risk. 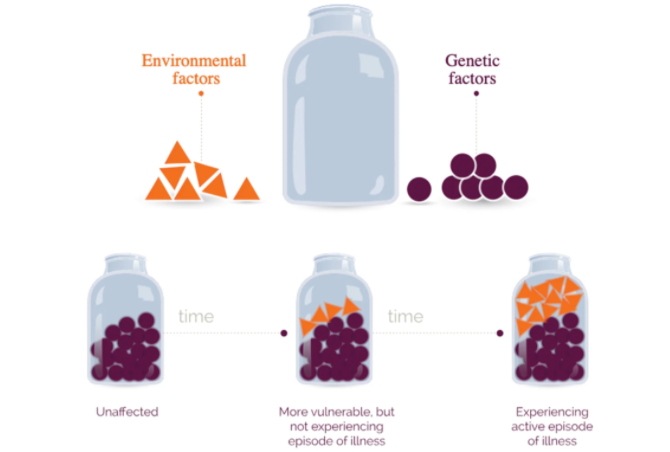 Family, twin, and adoption studies of eating disorders have enabled us to calculate these ‘heritability estimates’. Now, we have more advanced research methods available that can uncover exactly which genetic variants are involved in eating disorders. Efforts to achieve this are already well underway for anorexia nervosa. One study, published in 2019, found that DNA variations in eight specific areas of the human genome (i.e. all of our genetic information) were associated with risk of this disorder. Perhaps the most interesting outcome of this study, however, was the identification of genetic overlap with other traits. For example, genetic factors that are involved in the development of anorexia are also linked to physical activity and metabolic processes. Professor Cynthia Bulik wrote a blog post in which she detailed why these findings are not only scientifically interesting, but personally important for all those with experience of anorexia nervosa:

“To many of us, this comes as validation of what we have suspected for decades. Many of the perplexing behaviours associated with anorexia nervosa have been explained away as either psychological phenomena or by-products of starvation…..While these things may be true, we may be missing the metabolic component of the illness.”

While this was a momentous achievement for eating disorder research, it is only the beginning. It is likely that hundreds or even thousands of genes are involved in producing risk. We need larger sample sizes (i.e., more participants to take part in research!) of all eating disorders in order to discover more genetic variants responsible for these psychiatric illnesses. With this information, we may uncover more scientifically interesting and personally important explanations of behaviour across all eating disorders. This is where the Eating Disorders Genetics Initiative (EDGI) comes in.

EDGI will help us to better understand the role our genes and environment play on the development and treatment of these illnesses. Such an understanding means we will be better equipped to help those who are experiencing these illnesses. EDGI UK is also an important information resource that enables the efficient recontacting of volunteers for further research.

How can genetic research help people with eating disorders?

Current treatments for eating disorders mainly focus on family and psychological therapies, but these don’t capture the full picture. In understanding the biology behind eating disorders, EDGI hopes to achieve the following goals:

Who can take part?

* Unfortunately, due to ethical and funding limitations, we are only able to recruit from England at this moment in time. We plan to extend to the rest of the UK in the future.

**Please note that you do not need to have received a diagnosis or treatment in order to take part.

How can I take part?

Genetic research requires thousands of participants - every single person counts. You can sign up or get more information on our website: edgiuk.org. There are four steps to joining EDGI UK:

EDGI UK: One year on

For too long, eating disorders have been stigmatised by society, underrepresented in mental health research, and overlooked by research funding bodies. With your help, we can change this. Sign up today at edgiuk.org.